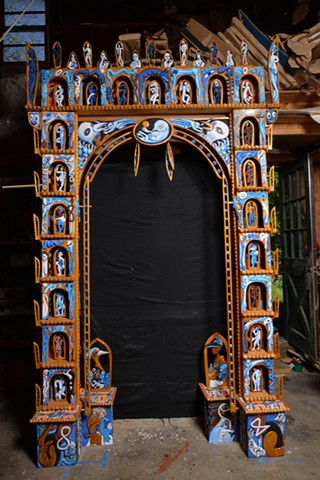 After 45 years of making things, I feel like I'm finally getting closer to being able to tell the story. It's about being spontaneous, being simple and being human. I was fortunate to grow up looking at all sorts of art and a theme emerged fairly early in my development. My interests focus on the meeting point between indigenous art and modernism. In fact, the much maligned "Primitivism in 20th Century Art" exhibit at MOMA in 1984 hit the nail on the head, at least for me. The tribal, the outsider, the child- these sign-posts were laid out for me by my ancestors. The name Holzman, I discovered in my late teens, means "Wood-man" in German. Woodcut printmaking was my first passion. That technique morphed into carved wood relief around 1990. In 2011, I began "The Book of Umm" to formalize my use of automatic drawing. Since then, this series has overtaken my narrative impulses and inspires most of the relief sculptures. Everything is moving forward. Thanks for visiting.